Last week, U.S. Senator David Perdue spoke with Kristin Moriarty of the Houston Home Journal – the Senator’s hometown newspaper – about his 40-year business career, the remarkable results he’s delivered in the Senate so far, and what’s at stake in this upcoming election.

Read the Houston Home Journal’s profile of Senator Perdue here and below. 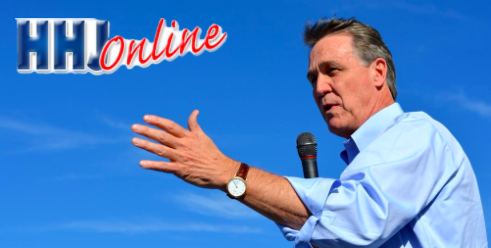 David Perdue is the senior Republican United States Senator from Georgia and has over 40 years of business experience as the former CEO of Reebok athletic brand and Dollar General stores. He was first elected to office in 2014 and wants to continue to serve the people.

Perdue was born in Macon, Georgia, and raised in Warner Robins where he grew up working on his family’s farm. Both of Perdue’s parents were school teachers, and from an early age, Perdue said he was taught the importance of hard work and a good education.

Perdue earned a degree in industrial engineering and a master’s in operations research while working warehouse and construction jobs at Georgia Tech. After graduating, he married his wife, Bonnie, whom he had met in the first grade, and they have been married for 46 years.

Prior to his decisive election to the U.S. Senate in 2014, Perdue had never held public office and was inspired to shake up Washington and change the direction of the country. Perdue said he is a champion for term limits for politicians, reining in out-of-control spending, growing the economy and tackling the nation’s debt crisis. In 2016, Perdue was an early supporter of President Donald J. Trump and continues to be one of the President’s closest allies in the U.S. Senate. For the 116th Congress, Perdue serves on the Armed Services, Banking, Budget, and Foreign Relations committees.

“I want to continue to serve and bring back the greatest economy President Trump and his administration had before the COVID-19 pandemic,” Perdue said. “But first we have to beat COVID and continue to develop a successful vaccine and other treatments. Before COVID, we had the best turnaround in history where 6.5 million people were able to pull themselves out of poverty. In contrast, prior to that in over 55 years of rural poverty, the level did not change, but in the past three years we helped those pull out.”

Perdue worked to pass the bipartisan CARES Act which, included:

Perdue also introduced the SCHOOL Act, which is a plan to help schools safely reopen or learn virtually until it is safe to return to the classroom.

Perdue set his priorities in 2014 and has accomplished the following:

“I want everyone to vote, whatever their persuasion may be,” Perdue said. “This is a crucial election and will determine the future of our country both from a political and judicial point of view. If the Democrats take majority seats, they will work to change the three branches of government that this country was built upon. We need law and order. My opponent and his team have spent millions of dollars on ads fabricating that I voted against health care coverage for those with pre-existing conditions, when in fact, I actually have a bill in there to protect those with pre-existing conditions. They’re taking my vote against Obamacare and hiding behind that.

“Secondly, my opponent continues to spread false allegations of me benefiting in stock trade from the pandemic,” he went on to say. “We caught them in a lie, I was never in any of those meetings. All facts have been reviewed by the Securities Exchange Commission, the Department of Justice and by the bipartisan Senate Ethics Committee. All have stated there is no evidence to support those allegations and that there was no intent to take advantage.”