Senator David Perdue On Fox Business: Anarchy Is Not The Answer

Today, U.S. Senator David Perdue joined Maria Bartiromo on Fox Business to discuss the importance of enforcing the law fairly, bringing calm back to cities across America, and holding Russia accountable for its nefarious acts. 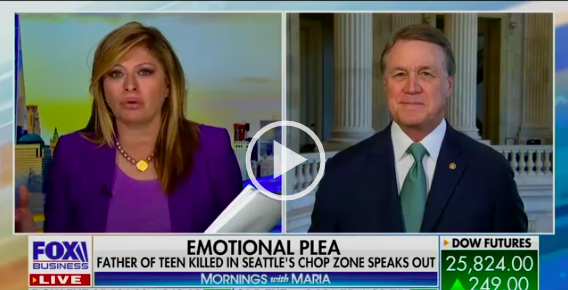 HIGHLIGHTS
On Anarchy and Unrest In American Cities:

“We are a land of laws, but those laws have to be enforced, and they have to be enforced fairly. Anarchy is not the answer. Defunding police, eliminating ICE, that’s what the left wants to do, and we see examples of that in our major cities right now. What the Senate is trying to do right now is get calm back in the country, and then let’s deal with this lawless nature that we have in some of our city mayors…Look at the sanctuary cities out there that defy federal law. We have city mayors encouraging people to violate federal law. That’s just unacceptable.”

On Reports Of Russian Bounties On American Service Members:

“We know Russia is led by a thug. He is nefarious. If what’s been reported is true, they need to be held accountable. Our number one objective right now around the world is to protect our men and women in uniform, not only from the threats of Russia and China but also from the Coronavirus as well. I think this heightens the idea that what President Trump has been doing in standing up to Putin and Russia with sanctions and getting our allies to stand behind that is absolutely the right strategy. We’ve got to stay true to that. We have an election coming up. We know they tried to affect our social media. This is something that is not going to go away, and I think the President has done a good job leading this in terms of standing up to Russia… At this point, we’ve got to be serious not just about Russia, but about North Korea, Iran, China, and still, Isis is out there reconstituting itself. This is a very dangerous world.”